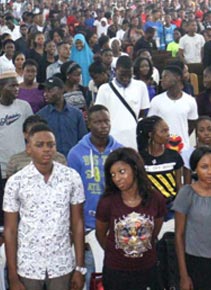 The Vice-Chancellor, Olabisi Onabanjo University, Ago-Iwoye, Prof. Ganiyu Olatunji Olatunde has warned the newly admitted students for the 2018/2019 academic session to shun any act or activities that were capable of tarnishing their image or bringing the name of the university into disrepute. He emphasized that the university had zero tolerance for cultism. The Vice-Chancellor equally advised the students to face their studies seriously and operate within the approved code of conduct of the University and abide by its rules and regulations so that they would have a successful academic sojourn in the University.

The Vice-Chancellor was making these remarks while declaring open the Orientation Programme for Freshmen held on Monday, 25th February, 2019 at the Otunba Gbenga Daniel Lecture Theatre, Main Campus of the University in Ago-Iwoye.

Earlier, Prof. Olatunde had congratulated the students for crossing the very stringent hurdles of admission into the University to study their various courses of choice. He informed them that they were lucky to be among the 6,416 applicants that gained admission into OOU out of over 21,000 candidates from the various parts of the country that applied for admission.

While counselling the freshmen, the Vice-Chancellor told them that registration was an important and necessary process of studentship in the University. According to him, any student that fails to register stands the risk of losing his/her studentship. He, therefore, enjoined them to quickly complete their registration so that the University could issue Identity Cards to them for the 2018/2019 academic session as soon as they were matriculated. Prof. Olatunde further explained to the students that with the issuance of Identity Cards, they had been conferred with full rights and privileges of members of the University community.

The Vice-Chancellor also advised the newly admitted students to go through the Students’ Handbook where the various rules governing the course system were explicit. He added that they should consult their Course Advisers, Faculty Officers, Heads of Departments, Deans of Faculties and Provosts of Colleges for explanation on grey areas.

Thereafter, the Deputy Vice-Chancellor ( Academic) , Prof. Deji Agboola took over the proceedings of the programme being the Chairman of the Morning Session. The students were given lectures on well selected topics . The Dean, Faculty of Education, Prof. M.A. Arikewuyo was on hand to present his lecture entitled “The Concept, Purpose and Challenges of University Education” while the Registrar, Mr Femi Ogunwomoju delivered the topic  “The University Students and Community: Code of Conduct , the Rights, Privileges and Limitations “. The Chairperson, Students’ Disciplinary Committee, Dr (Mrs.) Olatundun Oderinde spoke on “Sex, Drug and other Anti-Social Behaviour “.

Other topics discussed during the 2-Day Orientation Programme included “ Students’ Welfare Services in a University System “ delivered by the Dean, Students’ Affairs, Dr. Sefiu Oladunjoye while Prof. O.A. Lawal, Dean of Science treated the students to a lecture entitled “Understanding the Course Unit System and Requirement for Graduation in the University System “

Equally on hand to educate the students and acquaint them on how to get along in the University System were the various Heads of Units/Directorates that were rendering support services for academic sustenance.

It would be recalled that this Orientation Programme would have taken place in December 2018 but for the Industrial Action embarked upon by the Academic Staff Union of Universities in November 2018.