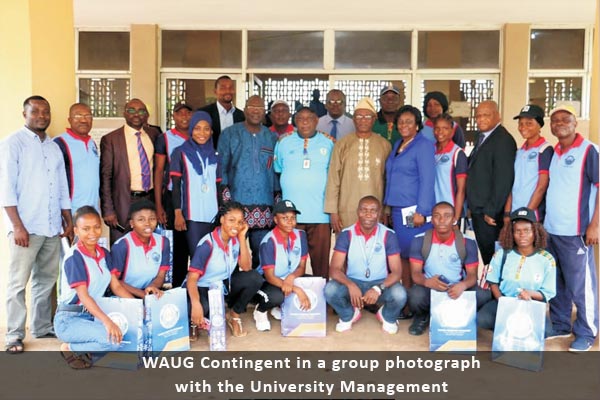 The Vice-Chancellor, Olabisi Onabanjo University, Ago-Iwoye, Prof. Ganiyu Olatunji Olatunde has lauded the overall performance of the University participants at the 14th Edition of West African University Games (WAUG) held recently at the University of Port-Harcourt, Port-Harcourt, Rivers State, Nigeria. Prof. Olatunde gave this commendation when he received the medals winning team in the presence of other management staff, on Tuesday, 9th April, 2019, in his office.

Presenting his report to the Management, the Chairman, OOU Sports Council, Prof. Bamidele Badejo thanked the Vice-Chancellor and his team for the support and various forms of assistance given by the University in respect of the preparation and participation of the University contingent at the Sports event. He, however, advised that more could still be done in terms of preparation for a similar event in the future. Speaking on their performances, Prof. Badejo disclosed that the OOU team went to the games with only 11 participants and took part in four sports – athletics, chess, table tennis, and taekwondo out of 16 sports featured by WAUG at the fiesta. He further stated that out of 36 Universities that participated in this year’s edition, only 32 of them won medals, including OOU, Ago-Iwoye.

The Sports Council Chairman thereafter, revealed that in spite of the challenges the OOU team came back home with four medals – two Silver in Chess, one bronze in Taekwondo, and one bronze in Table-Tennis. The Chairman acknowledged the exemplary behaviour of the University officials that accompanied the team. He implored management to consider, as a matter of necessity, the camping of athletes early enough for longer period preparatory for subsequent games, with readily available means of transportation and training facilities.
Responding, the Vice-Chancellor, Prof. Ganiyu Olatunji Olatunde welcomed the contingent and congratulated them on their enviable achievements despite their challenges. He promised his continued assistance in various forms for sporting activities within and outside the University premises. As a lover of sports and a former athlete who had won medals in 4x100m track race, along with colleagues in secondary school days, the Vice-Chancellor, gladly announced that plans were in the offing by the University authority for an urgent intervention in the development of the University Sports Complex. He specifically mentioned that when the plans eventually materialized, about N150,000,000.00 would be committed into the completion of the of the Sports complex. This according to the University’s helmsman would not only re-package sporting activities as a vocational option for our students thereby discouraging them from engaging in indecent acts, but would also increase the winning chances of our team in future local and international games competitions.

While recognizing and appreciating the participants individually, the Vice-Chancellor congratulated those who won medals in their various games and thanked others for participating in the event, urging them to strive harder at subsequent competitions.

Responding on behalf of the team, Miss Ayomide Adedayo Onasanya thanked the Vice-Chancellor and the Management for the honours bestowed on them by the University and for not only supporting their aspirations of participating in such a regional event but according them recognition of such magnitude. She, therefore, disclosed that this singular act of the University would spur them to continue to be good ambassadors of the institution during and after their period of study. Highlight of the reception programme was the presentation of gift items to the entire contingent including the coaching crew led by the Acting Director, Directorate of Sports, Mr. A. A. Makanjuola, as a mark of honour and appreciation for raising the banner of the institution high at an event of such international magnitude.