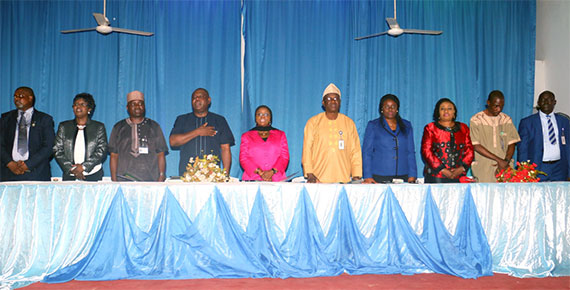 The Vice-Chancellor, Olabisi Onabanjo University Ago-Iwoye, Prof. Ganiyu Olatunde Olatunji has showered encomiums on the Senior Staff Association of Nigeria Universities (SSANU) OOU Branch for always aligning with the University culture and tradition by promoting academic excellence with the organization of its Annual Public Lecture.
Professor Olatunji made this remark during the 5th Annual Public Lecture/Award organized by the Association on Wednesday, 18th July, 2018 at the Otunba Gbenga Daniel Lecture Theatre, Main Campus of the University.

According to the Vice-Chancellor, these series of lectures and activities that were aimed at engendering the relationship between the University and the society was the University’s way of highlighting the significant contributions that the University was making and must continue to make in promoting, preserving and transmitting values to both University and the larger society.  He observed that in line with University tradition and culture, it was always a productive and hearty idea to bring people from outside the academia to join Universities in their various discourse and processes which he stated would contribute in shaping the future and stability of our Universities.
The Vice-Chancellor, therefore, commended SSANU, OOU Branch, on its initiative and contributions to the development of OOU, especially, its efforts in maintaining a stable system and its support for the administration.

Speaking earlier in his welcome address, the Chairman of SSANU, OOU Chapter, Comrade Taiwo T. Egberongbe informed the audience that the Guest Speaker who is also the Resident Electoral Commissioner for Oyo State, Barrister Mutiu Olalekan Agboke, ably represented by Mr. Olubunmi Ariyo had been a friend of the Union even before his appointment as a Resident Electoral Commissioner.  Comrade Egberongbe told the audience that apart from the annual lecture, five eminent Nigerians would be honoured by the Union.  He stated further that the awardees were chosen based on their contributions to the development of University education. According to him, all the recipients had excelled in rendering quality services to the University in areas such as administration, enactment of good laws and providing good leadership. He concluded that all these had effective impact on societal values in general and the development of the University in particular.

In her own welcome address, the Chairperson of the occasion, who is also the Chairman of OOU Governing Council and Pro-Chancellor, Mrs. Mosun Belo Olusoga said that a country’s political development depended solely on the country’s ability to conduct free and fair elections and usher in new administration in every facets of the country’s electoral process.  She, therefore, posited that election has become a window for assessing the practice of democracy in any nation.

The Pro-Chancellor observed that elections in Nigeria were usually subject of dispute and disagreements which had necessitated series of reforms in the electoral process over the years.  According to her, Universities in Nigeria have a unique role to play in expanding the frontier of our democratic growth as they were expected to come up with proactive recommendations and actionable reforms to safeguard and strengthen the nation’s democratic norms and values.

The highlight of the occasion was the delivery of the 5th Annual Lecture, entitled “Nigerian Universities and the Success of Electoral Reforms:  How far so far”, by the Resident Electoral Commissioner for Oyo State, Barrister Mutiu Agboke  who was ably represented by Mr. Olubunmi Ariyo, a Director at the INEC Office, Oyo State. Mr Ariyo noted that Nigerian Universities were expected to extend the frontier of researches in all aspects of human endeavour. He emphasized that this specific intervention of the academics was imperative for the Commission to achieve further successes in its electioneering mandate.

The INEC Director commended University staff for contributing to the credibility of elections conducted by the Commission by serving either as Collation Officers or Retuning Officers.

He called on members of the University community, especially, experts in computer software to take a critical look on the Commission’s Smart Card Readers with a view to assisting the Commission on its better performance.  He also urged Universities in Nigeria to take up the challenge of organizing and hosting matured debates among aspirants of political parties just like it is done in developed democracies.