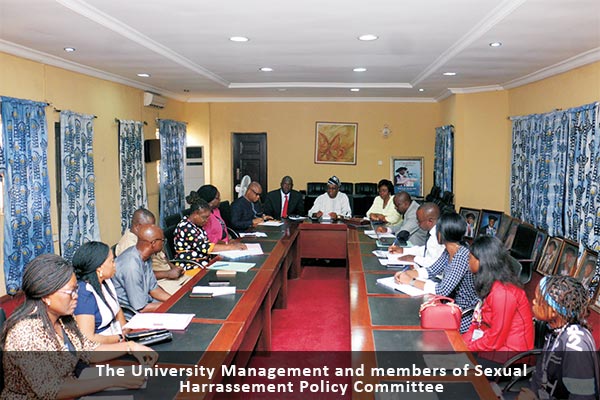 In line with best practices in educational institutions world-over, especially those of higher learning, the Vice-Chancellor, Olabisi Onabanjo University, Prof. Ganiyu Olatunji Olatunde on Monday, 1st of April, 2019 inaugurated the University Sexual Harassment Policy Committee to, among other responsibilities, develop a policy on sexual harassment and gender-based violence in the University. The Committee which has an Associate Professor from the Faculty of Education, Dr. (Mrs.) B. D. Oludipe, and a Principal Assistant Registrar, Mrs. A. A. Adesoye as the Chairperson and Secretary respectively will not only submit a compendium that would evolve a mechanism for the prevention and redress of sexual harassment cases and other acts of gender-based violence in the University, but also prescribe ways to implement the policy through proper complaints procedures and follow-up process.

While welcoming the Committee members and Management staff to the event, the Vice-Chancellor disclosed that the constitution and inauguration of the Committee were long overdue, as its relevance in ensuring and sustaining a safe and secured environment for all members of the Community to act freely within the ambit of the law cannot be over-emphasized. He added that the implementation of the policy documents that would be birthed by the Committee would by extension, go a long way in complementing the existing measures of addressing some of the seemingly inappropriate behaviour in the University.

Speaking on the arduous task before the members of the Committee whom he said were carefully selected from among staff of the University based on background check especially in terms of self-discipline and forthrightness, Prof. Olatunde congratulated and charged them to be committed to the assignment they were saddled with, in the overall interest of the University’s image. He, thereafter, emphasized the need for the Committee to ensure that the fundamentals of cases on sexual harassment and gender-based violence which according to the Vice-Chancellor included filing of complaints, complaints procedure, employee rights, and appropriate disciplinary action were adequately considered.

In her contribution, the Deputy Vice-Chancellor (Administration), Prof. (Mrs.) Ebun Oduwole who superintends over the activities of the Committee, equally commended the management of the University for the giant stride at inaugurating such a Committee, which according to her was in line with international best practices. She expressed hope that the constitution of the Committee will not only entrench but strengthen safe working environment, in the University’s quest of attaining world class standard. She, thereafter, commended the members for accepting to serve and urged them to see the assignment as a call to service.

Responding on behalf of the other members of the Committee, the Chairperson, Dr. (Mrs.) Oludipe thanked the Vice-Chancellor and other members of management for not only identifying in them the qualities considered to have placed them on higher stead for the assignment but also for the trust and confidence reposed in them. On behalf of others, she, therefore, promised that they would discharge their duties to the satisfaction of the management in particular and the University Community in general bearing in mind the urgency and importance the assignment required.

It would be recalled that the current management under the leadership of Prof. Ganiyu Olatunji Olatunde, at inception, had resolved to arrest inappropriate behaviour like indecent dressing, sexual harassment, gender-based violence within the University Community. Some of these the Vice-Chancellor disclosed had been achieved through proactive and reactive measures in the last one and a half years. Series of activities and projects are still being reinforced in that direction which according to the University helmsman would include awareness bill boards, other discrete security measures, and the Sexual Harassment and Gender-based Violence policy among others.