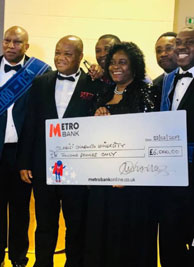 It was a night to remember when members of the OSU/OOU Alumni Association, UK Chapter held its Gala Night and Black Tie on rd Saturday, 23 February, 2019 at the Forest Row Centre, Lodge Lane, Collier Row, Romford E s s e x , London. T h e e v e n t tagged “A Unique Opportunity to give Back” was initiated by the Executive of the Alumni led by Mr. Segun Sokoya with the aim to raise a minimum of £5,000 pounds in 2019 towards funding a laboratory equipment for the Anatomy Department, instituting an endowment prize fund for the overall best graduating student in the University and a cash support to seven indigent students from the Faculty of Administration and Management Science.

Welcoming members and guests to the event, the President, OSU/OOU Alumni Association, UK Chapter, Mr. Segun Sokoya revealed that the Chapter’s primary aim was to create and build a vibrant, viable and sustainable Alumni platform in the UK through networking and socializing. He added that the chapter also aimed to coordinate and periodically deliver rewarding and enviable “Give-Back” projects to support the University. Mr. Sokoya, thereafter, encouraged the alumni to take advantage of the gathering to improve their n e t wo r k i n g o p p o r t u n i t i e s a n d fo rg e meaningful business relationships.

In his goodwill message to the alumni members, the Vice-Chancellor, Prof. Ganiyu Olatunji Olatunde, who was represented at the occasion by the Deputy Vice- Chancellor (Administration), Professor (Mrs.) Ebun Oduwole informed them that the i r Unive r s i t y w a s undergoing improvement in terms of aesthetic, i m b i b i n g a c a d e m i c culture, stability in academic calendar, research and development. She told them that the University had just introduced the “OOU E-Transcript” which enabled alumni book for their transcripts from anywhere in the world. Professor Oduwole charged them to sustain the culture of giving back to their alma-mater and endeavor to visit the University from time to time. She was profusely grateful to the Executive of the association for the warm reception accorded some members of Council and Management during their visit to United Kingdom in October 2018.

T h e U n i v e r s i t y R e g i s t r a r, M r. F e m i Ogunmowoju, who was also in attendance stated that the graduates of the University were making waves in all areas of human endeavours. He added that the Management was grateful to other Chapters of the Alumni that keep on rendering assistance to the University, especially Chapters in Nigeria and United States of America. He called on other Alumni Chapters to come forward and join the “Give-Back Crusade”.

The highpoint of the occasion was the presentation of £6,000 to the University by the President, UK Chapter of the OOU Alumni Association Mr. Segun Sokoya.