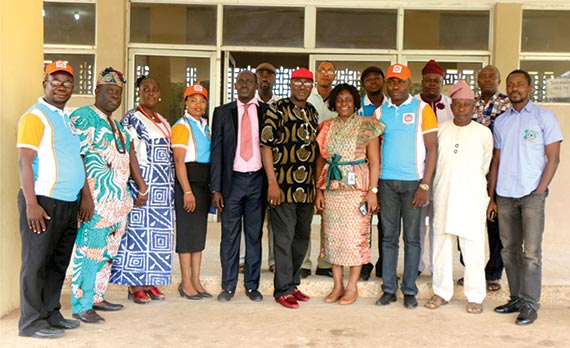 The Ogun State Council of the Non Academic Union of Nigerian Universities paid the Management of the University a visit on 28th June, 2018.

She stressed that the current Management has adopted a positive approach to any negotiation proposed by the Unions hence this had augur well for the University in terms of stability.

Earlier on, the Spokesperson of the NASU Council, Comrade K. K. O. Lawal emphasized that the Council was on a mission to the University to salute the University for its prompt payment of backlog of arrears being owed the Union members in the University.  He however pleaded that the smooth and cordial relationship the University Management had been having with NASU be further strengthened if the University could looke into the plight  of some of its staff who were converted from full staff to contract staff status most especially the staff in the Security Unit of the University.

Comrade Lawal commended the University for her readiness to always enter into negotiation with the Union.  Lawal attested that the positive reports received by the State Council on the state of the University necessitated their visit and thus necessitated the ceding of the quarterly hosting right to OOU Chapter.

In his remarks, the NASU Chairman, OOU Chapter, Comrade J. O. Rasaki said the Chapter would be extremely grateful, if the University could further intensify its welfare policies for the benefits of the Union members.  He urged the University Management to fast-track the agreement reached on the plight of the Security contract staff whose “take home” had been reduced with the little stipend they were earning in the University Security Unit.  He implored the Vice-Chancellor, as a matter of urgency, to send the request to the University Governing Council for consideration.

The Deputy Vice-Chancellor,  Professor (Mrs.) Ebun Oduwole who received the team on behalf of the Vice-Chancellor, Professor Ganiyu Olatunji Olatunde welcomed the guests and urged them to sow the word of God in the minds of the students and participants attending the crusade in order to shield them from social vices that were so common in Nigerian University.  She said the visit would go a long way in shaping the lives of the University students.

In his response, Pastor Edison Daminabo, enjoined the members of the Management to be watchful of their actions in the course of their duties.  He stressed that whatever human beings sowed, they would reap.  He emphasized that if anybody sowed disharmony, hatred, discord and any vice, he would surely reap the fruits negatively on this earth, hence human being must be committed to perfection as God the creator had deemed it.  He prayed that members of the Management would sow positively by exhibiting love, peace, unity and harmony so that they would reap positively on this earth and hereafter.

The brief ceremony was rounded off with prayer by Pastor Edison Daminabo.