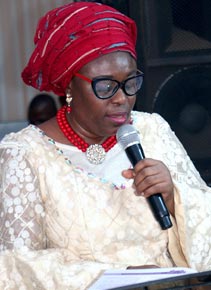 The Annual Sir Kesington A. Adebutu Christmas Carol Service was held on Sunday, 23rd December, 2018 at the Marble House residence of the octogenarian in Iperu Remo, Ogun State.

The Christmas Carol Service, which was the 12th in the series of yearly events was well attended by Royal fathers, clergymen, friends, families and associates of Sir Kesington Adebutu, with the OOU Deputy Vice-Chancellor (Administration), Professor (Mrs.) Ebun Oduwole, who led some students of the Performing Arts Department to the event, representing the University.

The annual event which was packaged by the Philanthropist, Sir Kesington Adebutu to thank God Almighty for His faithfulness and kindness in his life was also witnessed by the school children and the less privileged from various communities in Ogun State.

Worthy of note at the ceremony was the first Bible lesson that was read by Sir Adebutu which was taken from Genesis Chapter 3, verses 1-19 and which was about the fall of man in the Garden of Eden and the resultant consequences.

Thereafter, Carol music and songs from the Choir of Methodist Church Nigeria (MCN) Remo Cathedral, MCN Imosan, MCN Iba Road, Iperu, and MCN Agbala were rendered to the admiration of the guests.

The 4th and 5th Bible lessons were read by Prince O. P. Adeboye and Bishop S. A. Adegbite (Bishop of Owo) respectively while the 7th lesson which was taken from the Gospel according to Saint Luke Chapter 2, verses 1-14 was eloquently read by Professor (Mrs.) Ebun Oduwole, Deputy Vice-Chancellor (Administration).

Thereafter, the serene atmosphere of the occasion became agog when OOU Students rendered their spirit-lifting carol songs which inspired guests and other attendees to dance and praise the Almighty God for His goodness.

In the event that followed, Professor (Mrs.) Ebun Oduwole, delivered the goodwill message of the Vice-Chancellor, Professor Ganiyu Olatunji Olatunde and that of the University Community where she commended the philanthropic activities of Sir Kesington Adebutu especially his various donations to the University and his unprecedented efforts at helping to source funds for the development of the University in his capacity as President, Olabisi Onabanjo University Development Foundation (OOUDEF).