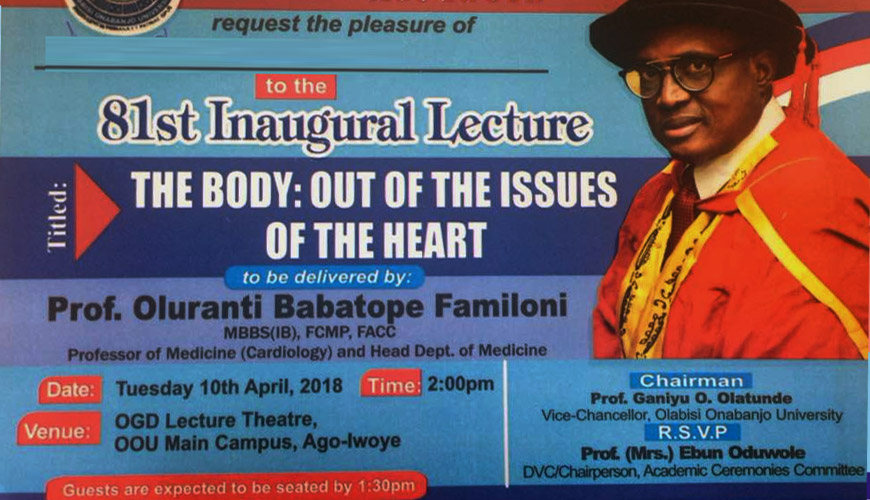 Olabisi Onabanjo University will on Tuesday, 10th April, 2018 hold its 81st  Inaugural Lecture entitled “The Body:  Out of the Issues of the Heart” at the Otunba Gbenga Daniel Lecture Theatre, Main Campus, Ago-Iwoye by 2.00pm.

The Lecture will be delivered by Professor Oluranti Babatope Familoni a Professor of Cardiology from the Department of Medicine under the Chairmanship of the Vice-Chancellor, Professor Ganiyu Olatunji Olatunde.

Born on 27th June, 1955 in Ido-Ekiti to the family of Mr. Samuel Kayode Familoni and Mrs. Florence Olabimpe Familoni of Ekiti State.

Professor Oluranti Babatope Familoni had his early education at Omodewa Primary School, Ido-Ekiti and Christ’s Secondary School, Ado-Ekiti, passing out with WASCE Grade I in 1971.

He later gained admission into the University of Ibadan through concessional entrance examination for a preliminary course in Science in October 1972.

He graduated from the University of Ibadan as a National/University Scholar, in June 1978 with MB.BS degree.

After his housemanship and National Youth Service, Professor Familoni returned to the University College Hospital, Ibadan for residency training in Internal Medicine where he rose to the grade of Senior Registrar.

In 1985, Professor Familoni proceeded to the Cardiac Department of a London Hospital Whitechapel in the United Kingdom to complete his specialization in Cardiology where he obtained his FMCP in May, 1987.

Professor Familoni after some stints in private practice later joined the services of the University with his appointment as a Lecturer I in November 1st, 1995 after the unqualified amnesty to all partakers in the strike and rose through the ranks to become a Professor of Medicine in October 2013.

In December 2015, Professor Familoni was awarded the Fellowship of the American College of Cardiology.

He is presently a member of Editorial Board of Cardiovascular Journal of Africa, Nigerian Journal of Cardiology and expert panel reviewing the Guidelines for the treatment of hypertension in Nigeria.

He is a learned scholar with fifty three (53) papers published in reputable international and national Journals.

The Inaugural lecture is expected to be graced by distinguished scholars, government functionaries, eminent personalities, Traditional rulers and well meaning Nigerians from all walks of life.