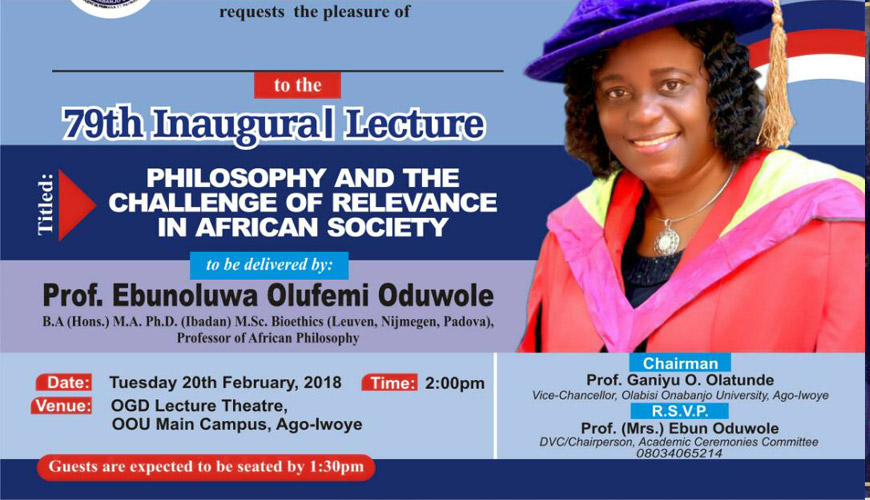 The Lecture will be delivered by Professor (Mrs.) Ebunoluwa Olufemi Oduwole, a Professor of African Philosophy and currently the Deputy Vice-Chancellor and Chairman, Academic Ceremonies Committee.

Born on 10th September, 1962 in Ibadan, Professor (Mrs.) Ebunoluwa Olufemi Oduwole joined the services of the University on 17th October, 1985 as Graduate Assistant and through dint of hard-work and commitment rose through the ranks to become a Professor in the Department of Philosophy, Faculty of Arts in 2013.

Oduwole has served the University in many capacities such as, Head, Department of Philosophy (July 2003 – August 2006), Business Manager, OYE:Ogun Journal of Arts (1988 – 2004), Member, Sub-Committee on Academic Ceremonies (2003 to date); Senate Representative on Joint Committee of Council and Senate on University Ventures (2005-2006), Chairperson, Students Disciplinary Committee OACHS/Ikenne (2009 to date). She meritoriously served as the Director of General Studies for a period of three years and relinquished the post in July 2016 having been elected as the Dean, Faculty of Arts.

Professor Oduwole is a member of many professional bodies that include Nigerian Philosophical Association.

She has contributed to the advancement of knowledge with her numerous books, journal articles and publications in reputable local and international Journals. She has attended so many International and Local Conferences among which she was Lead presenter. She is the current Editor of BEOnline Journal, Editor-in-Chief of Agogo Journal of Humanities, African Journal of Science and Nature, International Journal of Environmental Studies and Sustainability.

She is happily married with children.

The Inaugural lecture is expected to be graced by distinguished scholars, government functionaries, eminent personalities, Traditional rulers and well meaning Nigerians from all walks of life.