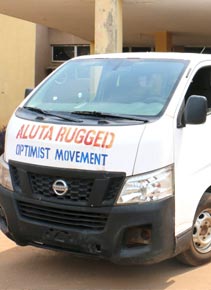 Speaking during the event, the Deputy Vice-Chancellor (Academics), Professor A.O.J Agboola, admonished the Students Union Executives that as leaders of the students, they should be above board and should display high sense of discipline and responsibility in the discharge of their duties. Specifically, he enjoined them to maintain the vehicle and all other equipment in their care as doing so, would prepare them for leadership challenges and responsibilities even after their graduation from the University. He further implored them to make themselves accessible to the students and be ready to use the bus to convey students whenever they (students) are in need of such services, as this would portray them as leaders who show good examples and who have compassion for their followers.

In his own remarks, the Ag. Dean, Student Affairs, Dr. S. Oladunjoye appreciated the efforts of the Management under the leadership of Professor Ganiyu Olatunji Olatunde for fulfilling the promises made on the repair/refurbishment of the Students Union Government vehicle and other requests made by the SUG. He informed that the relationship between the Management and the SUG executives has been very cordial as a result of the Management’s efforts in promoting the welfare of the students. He also expressed his unalloyed appreciation to the current set of SUG executives for believing and cooperating with the University Management in its onerous task of building the University to a World-Class standard.

While responding, the President of the Students Union Government, Mr. Akinbo Afolabi appreciated the friendly and fatherly disposition of the University Management to the demands of the students. He expressed his joy and that of other executive members   on the timely and prompt response of the Management to issues that would have degenerated to crisis. He thereafter pleaded with the Management to avail them the opportunity of having a driver who will help in driving and maintaining the bus while promising further that the new SUG executives under his leadership would continue to do everything possible to hearken to the counsel of the Management in maintaining the vehicle and other equipment at the Student Union Government building.