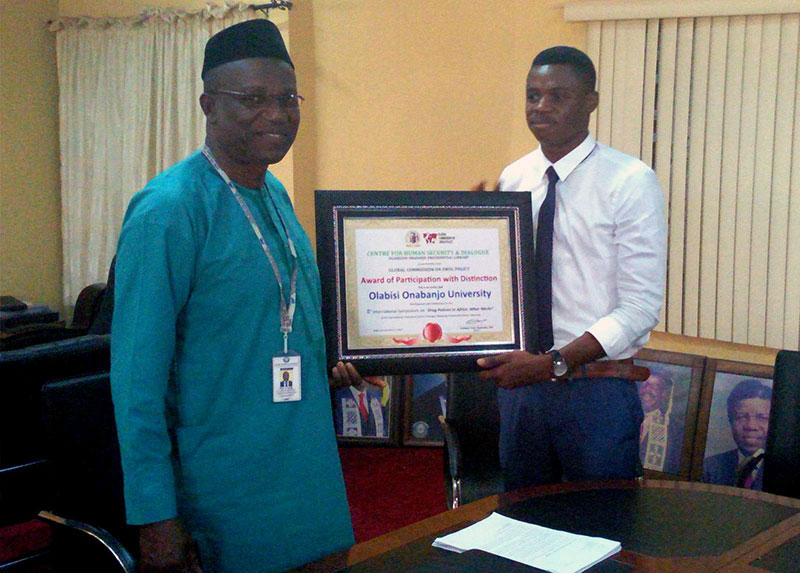 Some selected students led by Dr. O. E. Jagun and Mrs. C. O. Babalola both lecturers in the University on Friday, 2nd March, 2018 took part in an International Symposium on drug policy organized by the Olusegun Obasanjo Presidential Library in conjunction with Global Commission on Drug Policy and excelled at the symposium.

The event attracted lots of participants from many countries.  It witnessed competitive presentations among tertiary institutions and secondary schools and it coincided with former President Olusegun Obasanjo 81st birthday.

The aim of the symposium was to brainstorm and create awareness on drug issues with informed opinion on dangers of drug and pulse of the youth on how best to tackle it.  The symposium also assessed the current trend of drug policy in countries all over the world

The selected students of the University spoke on contemporary issues on drug abuse, policies and ways of curtailing the abuse.  The students debated on a poser whether to criminalize or decriminalize the heinous act whose telling effect negatively affects the youth and humanity.  In all, the students were applauded by participants for their intelligent contributions.

Dr. Jagun who led the students remarked that the team was highly commended.  He observed that the symposium was enlightening and exciting.   He said that check on drug abuse must begin from the family and parents.  He concluded that drug suspects should not be jailed for their offences but rather be counseled into leaving the obnoxious act.

Dr. Jagun added that rather than criminalize the act, the society’s response must be helpful.  He advised governments all over the world to help in decriminalizing suspects rather that applying punitive measures.  He submitted that drug taking must be tackled whole heartedly with holistic contributions of parents, religious leaders and the society.

Receiving the team in his office, the Vice-Chancellor, Professor Ganiyu Olatunji Olatunde who was exceedingly happy about the outstanding performance of the University contingent to the symposium commended the team and affirmed that such performance showed the good aspects of the University delegation and the students of Olabisi Onabanjo University.  He was grateful for the students’ intelligence and stressed that the sky was their limit.

Professor Olatunde stressed that their performance had raised the bar of international discourse on drugs and projected the image of the University positively.