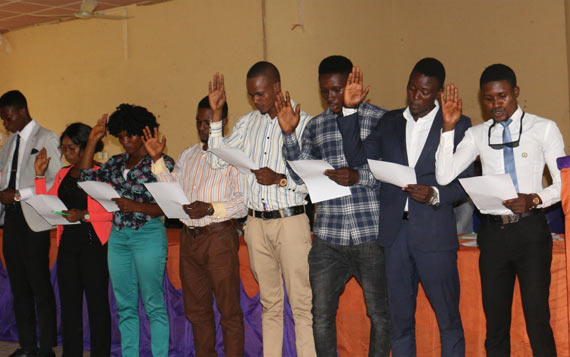 Political activities among students of Olabisi Onabanjo University, Ago-Iwoye, especially, on the election of their leaders for the 2018/2019 session reached its crescendo on Monday, 5th November, 2018, when the newly elected leaders of the Central Executive Council and Members of the Students’ Senate were sworn-in at the Moot Court Lecture Theatre of the University.

Speaking at the ceremony,the Vice-Chancellor, Professor Ganiyu Olatunji Olatunde expressed his delight at the political maturity exhibited by the students before, during and after the election. He specifically noted the display of spirit of sportsmanship and the exhibition of comradeship by the contestants. He further observed that since the conclusion of the election, the newly elected leaders had been partnering with the University and making impressive and progressive suggestions on how to better the lots of the students. He therefore, charged them to keep up the sense of commitment, dedication and patriotism as these attributes would certainly lift them to greater pedestal in life.

Reacting to the address of the Vice-Chancellor, the President, Olabisi Onabanjo University Students’ Union Government, Mr. Akinbo Afolabi, expressed his appreciation to the great OOUites who elected him into the exalted office as well as the University Management for support, especially in the provision of logistics and ensuring a free, fair and violent-free election. He promised that as the 32nd President of the SUG, he would do his best to write his name in gold at the expiration of his tenure. He saluted the “struggle” spirit of his predecessors and specifically thanked the immediate past SUG President, Dr. Adeosun Williams for being a good mentor. He thereafter, charged all the students and the newly sworn-in members of the Central Executive Council (CEC) and the Members of the Students’ Senate to brace up and work to enhance the peace and progress of the University. He appealed to the University Management to always put the interest of the students and their welfare in the front burner of decision-making.

In his own address, the Acting Dean, Student Affairs, Dr. O.S. Oladunjoye appreciated the University Management for their unflinching support for students matters at all times. He also commended the University Management’s passion for democracy and its tenets, which played out during the election of the Students’ Union Government. He further appreciated the good behavior of the contestants for the various positions, as the election was rancor-free and violent-free. He finally admonished the new executives to embrace consultation rather than confrontation whenever any issue that concerns students’ welfare arises.

While giving the closing remark, the Vice-Chancellor, Professor Ganiyu Olatunji Olatunde reiterated the unalloyed desire of the University Management to always partner with the Students’ Union Government to ensure a peaceful and workable system. He intimated them of the efforts put in place to ensure that students’ examinations results are released on time and the efforts of the University in partnering with an organization that will complete the road light from the University Gate to the Main Campus. He added that the Olabisi Onabanjo University, Alumni Association, OOU Chapter, recently donated 20 projectors and 20 APC Surge Protectors costing Two Million Eight Hundred and Ninety Thousand (N2,890,000.00) Naira to the University to upgrade its educational infrastructure and teaching aids, promising that this will be distributed to various Lecture Halls for students use.

He finally expressed the Management’s decision to repair the Operation vehicle of the Students’ Union Government and provide other basic needs that will help the new SUG in the discharge of its mandate.