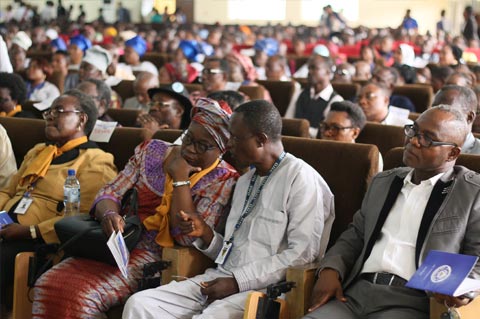 In order to enhance the University’s visibility on the Web, the administration of Professor Ganiyu Olatunji Olatunde has taken some administrative giant steps by establishing a WEBOMETRIC Unit, resuscitating the ICT Committee and signing a Memorandum of Cooperation (MoC) with the Massachusetts Institute of Technology, Massachusetts, USA  (MIT) on the use of its OpenCourseWare  (OCW).
According to the Vice-Chancellor, the Committee would develop an ICT policy for the University while the memorandum with the MIT would improve research and development and ensure richer content from the University’s domain.

Professor Olatunde, who was addressing members of the University Congregation at the Senate Chamber for the first time since his assumption of office in May, 2017, disclosed that his administration had improved security on campus by engaging the services of security agencies and recruiting special marshals to man the entry and exit points of the University as well as securing other strategic areas within the University environment.  These have put in check security infractions  on campus.  In addition to these measures, the Vice-Chancellor disclosed that Closed Circuit Television (CCTV) was installed to monitor major parts of the Main Campus with Still Cameras located at strategic areas.

Reiterating his administration’s modest achievements, Professor Olatunde informed members of the University Congregation about the improvement in the accreditation status of academic programmes in the University from 76% which he met on assumption of office. He disclosed that 94% of all the academic programmes in the University enjoyed full accreditation status by the NUC.  He also said that his administration had reviewed and aligned the curricula of programmes that were not in tandem with the NUC BMAS.  He added that a Quality Assurance Unit had been established at the Vice-Chancellor’s Office to develop a quality assurance policy for the University, monitor and assess quality, adequacy and currency of facilities and resources in Colleges, Faculties and Departments of the University.  Also established under the Vice-Chancellor’s office was the Linkages and Advancement Unit which, according to Professor Olatunde, would prioritize the execution of the contents of the MoU in respect of staff and students exchange, and capacity building workshops. The Unit would also explore other functional partnerships and MoU signed with Morgan State University, USA that would benefit both staff and students.

On funding, the Vice-Chancellor disclosed to the Congregation that his administration had continually engaged the state government and subsequently got the University’s monthly subvention increased.
Speaking on staff welfare, Professor Olatunde said that Management had always ensured prompt payment of staff salaries as and when due but not later than 25th of every month. Most importantly, he disclosed that the University had paid 2016 staff promotion arrears including 2017 promotion benefits.  Other payments made to staff were earned allowances and salary arrears to all recalled teaching and non-teaching staff.

The students were not left out of the provision of welfare packages as the Vice-Chancellor revealed that a Students’ Welfare and Hostel Management Committee was established to interphase with the owners of students’ hostels and students, with the goal of ensuring that mutual and beneficial relationships continue to exist between them.  He added that six academic buildings that had been vacated were converted to hostel accommodation for students in Sagamu Campus, thus providing additional bed spaces.
Furthermore, Professor Olatunde said that the Management had approved additional requests by private entrepreneurs to build hostel accommodation for students on Campus.
Meanwhile, the Vice-Chancellor was full of praise for members of his management team and staff for the success recorded so far.
He, however, solicited for more support from staff on the need to face future challenges in the areas of funding, beautification of campuses, accreditation matters and improving the infrastructure and facilities throughout the University, among others.

He also thanked the Visitor to the University and members of the Governing Council for their support and encouragement during the course of the year.