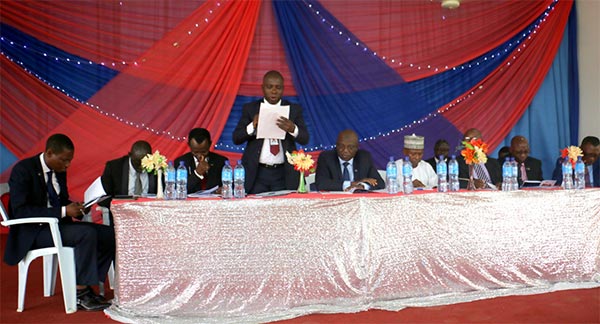 The Chairman, Board of Directors of the Bank, Professor Ganiyu Olatunji Olatunde in his speech, welcomed Shareholders of the Bank and expressed his appreciation for their support and cooperation in ensuring the Bank’s sustained growth and development, as the report before him had indicated that the Bank has leaped forward in the area of its capital outlay as well as shareholders dividends.
According to him, in the year 2017 under review, the Bank recorded a boost in its gross earnings as against the one recorded in 2016 financial year, from N59,104 million in 2016 to N63,78 million in 2017 representing 35.36% increase.  The Bank recorded a profit after tax of N10,264 million for the year under review as against N6.636 million recorded in 2016.

He posited that he was optimistic of the effective business networking approach being employed by the Bank within and outside the university community which has added value to its business interest and which would continue to help the Bank in its development, penetration of new markets and, the dream to make it attain a national status as a micro-finance Bank in line with the Central Bank categorization.

In the aspect of Human Resources, he informed the Shareholders that the bank has provided a conducive environment which encouraged good interpersonal relationships, team spirit, good initiatives, self-confidence, creativity and self-development at work. He posited that the management and staff of the Microfinance Bank are allowed to attend Seminars, Conferences and run courses most especially those organized by the Central bank of Nigeria (CBN) and other financial training institutions in order to ensure innovation, efficiency and increased output of staff and also, encourage them to improve themselves academically in the areas that are being recognized in the industry and commerce for overall effectiveness.

While raising suggestions on how to actualize the N200 million Capital Base, stakeholders were of the opinion that  staff of the Microfinance Bank should show more aggressiveness in creating awareness for new/prospective shareholders and also, extending their focus on small business owners around the communities that exist within the coverage of the Bank.
While concluding, the Chairman, Board of Directors, Professor GaniyuOlatunjiOlatundeassured the gathering that the University would continue to contribute its quota to the development of the Bank and strive to increase its unit threshold with the Bank in order to actualize the dream of surpassing the N200 million Capital base.