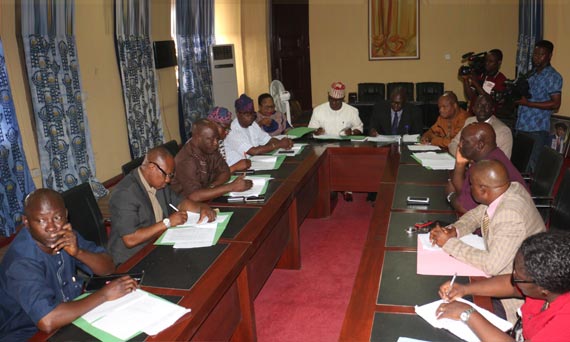 The House Committee on Education, Science and Technology of the Ogun State House of Assembly, Abeokuta paid a visit to Olabisi Onabanjo University, Ago-Iwoye, Ogun State on Tuesday, 30th October, 2018, to perform its oversight function as stipulated by the law of the Assembly. The visit to the University was led by Hon. (Pastor) Olayiwola Ojodu, the Chairman of the Committee, Hon. (Mrs.) Folakemi Julianah Akintayo (Vice-Chairman), , Hon. Oyenuga Olufowobi (Member),  Hon. Adebiyi Adeleye (Member) and Hon. Olusola Bankole (Member).

Welcoming the members of the House Committee on behalf of the Vice-Chancellor, Professor Ganiyu Olatunji Olatunde, the Deputy Vice-Chancellor (Academics), Professor A.O.J. Agboola praised the commitment and the dedication of the Committee members on the assignment of monitoring budget performance of Institutions of higher learning in the State. He informed the Committee of the peculiar revenue process of the University and revealed that the University normally generates the bulk of its revenue between October and December, every year, which coincides with the resumption period of the University, at which time students are required to pay tuition fees. He informed the Committee that the level of compliance on payment for 2018/2019 session was about seventy percent (70%). He intimated the Committee members that other sources of revenue to the University include payment for academic Transcripts which was at 119%, payment of Acceptance fee by Fresh students which was put at 50.2% and TETFund intervention, which was being rotated on yearly basis between the three State-owned Universities, that apparently was the reason for zero performance in capital expenditure for the year under review (2018). He added that the outstanding subvention due to the University from the State Government stood at N 4.1billion.

On achievements by the University during the year under review, the Deputy Vice-Chancellor (Academics) revealed that the academic calendar of the University had been very stable in the last six years and that the University also installed CCTV cameras on campus to engender security of lives and property within the campus while beautification and landscaping for the enhancement of aesthetics in the University was ongoing at the Faculty of Administration and Management Sciences and that of Education, with efforts being made to extend this to all other areas of the campus.

The Deputy Vice-Chancellor, (Academics) also intimated the House Committee members of the plan by the University to host all its benefactors and friends and appreciate them for their support and philanthropic gestures. He disclosed that recently, the Awujale, HRM, Oba (Dr.) Sikiru Kayode Adetona laid the foundation of his Professorial Chair in Governance Building Complex which will further enhance the infrastructural base of the University. He added that the University has been relating well with the various chapters of the OOU Alumni Associations in other to foster good understanding and involve them in the development of the University. On increase in academic programmes of the University, the Deputy Vice-Chancellor, (Academics) revealed that the National Universities Commission (NUC) recently approved three new programmes – B.NSc. Nursing, B.A. Linguistics and B.A. Music, as an addition to the 71 programmes being run by the University.

In concluding, the House Committee Chairman, Hon.(Pastor) Olayiwola Ojodu thanked the University Management for the good job they were doing at ensuring a smooth flow of academic calendar, transparency in all spheres of revenue and expenditure profiles and their efforts at maintaining and improving the status of the University.
At the event with the Deputy Vice-Chancellor (Academics), were the Registrar of the University, Mr. Olufemi Ogunwomoju, the Bursar, Mr. Semiu Makinde and other University functionaries.