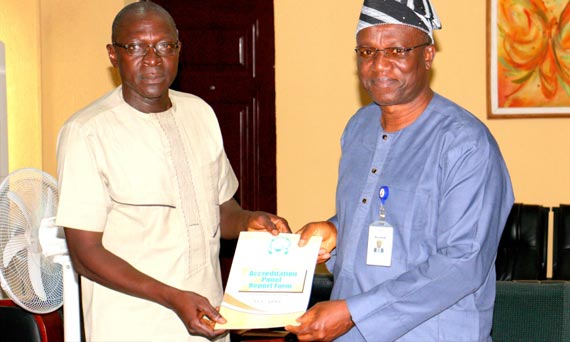 Accreditors from the National Universities Commission (NUC), Abuja were received at Olabisi Onabanjo University, Ago-Iwoye on Thursday, 1st November, 2018, for the accreditation of the Cooperative and Rural Development Programme of the Faculty of Administration and Management Sciences.  The team, led by Professor Barde Barnabas of the Faculty of Administration, Nasarawa State University (Chairman) was received by the Vice-Chancellor, Professor Ganiyu Olatunji Olatunde and other top functionaries of the University.

In his welcome address, the Vice-Chancellor, Professor Ganiyu Olatunji Olatunde, gave a brief history of the University and its achievements since inception till date. He informed the Accreditation Team that the University at inception, in 1982, was known as Ogun State University (OSU), but the name was later changed to Olabisi Onabanjo University (OOU) in honour of the first Visitor to the University, Chief Victor Olabisi Onabanjo in 2001. He added that the University operates a multi-campus system with four campuses situated in Ago-Iwoye (Main Campus), having seven faculties, Sagamu, which houses the Obafemi Awolowo College of Health Sciences and three faculties, Ayetoro, which houses the College of Agricultural Sciences with two faculties and Ibogun, that has the College of Engineering and Environmental Studies also with two faculties.  He surmised that in all, the University has  three Colleges, 13 Faculties, 53 Departments and 74 programmes, including the three newly approved programmes by the NUC for the 2018/2019 Session  – B.NSc. Nursing, B.A. Music and B.A. Linguistics. He posited that the University was blessed with a crop of highly dedicated members of staff who are very resourceful and diligent. He informed the Team members that the University have taken cognizance of the issues raised during the first visit to the programme and had made necessary amendments in line with the suggestions and recommendations of the then Accreditors. He welcomed the Team members to the University and assured them of necessary cooperation by staff and students of the programme to be visited.

The leader of the NUC Accreditation Team for Cooperative and Rural Development, Professor Barde Barnabas, in his response thanked the Vice-Chancellor and other members of the University Management for the warm reception accorded them. He informed the gathering that the world was now a global village and the NUC, as an Agency, was poised to ensure that quality and standards were maintained and that degrees awarded in Nigerian Universities are made competitive and can stand the test of universal quality. He stressed that achieving this goal was central to the vision and mission of the NUC hence the need to periodically assess the programmes in all Nigerian Universities. He assured the University Management that the visit was not to witch-hunt or condemn in any way but to add value to the University which already had the reputation of producing some of the best of brains in the Country, as evident in the activities of many of its Alumni members in public and private sectors of the economy. He specifically mentioned the brilliant performance of the current National President of ASUU, Professor Biodun Ogunyemi, an Alumnus and a staff of the University.

Similarly, on Tuesday, 6th November, 2018, another Team from the NUC arrived at the Olabisi Onabanjo University, Ago-Iwoye for the accreditation of Anatomy programme. The team was led by Professor Hakeem Fawehinmi from University of Port-Harcourt, with Professor Aliu Shugaba from University of Jos and Professor Victor Fischer from University of Calabar as members and Dr. I.A. Ajani from NUC, Abuja, as Secretary to the Team.

Thereafter, the Chairman of the NUC Accreditation Team, Professor Hakeem Fawehinmi, expressed his appreciation for the warm reception accorded the members of the Team by the University Management. He assured that the team would be objective in the task that was to be carried out especially, in respect of infrastructural facilities and staffing, as these indices were of paramount importance.