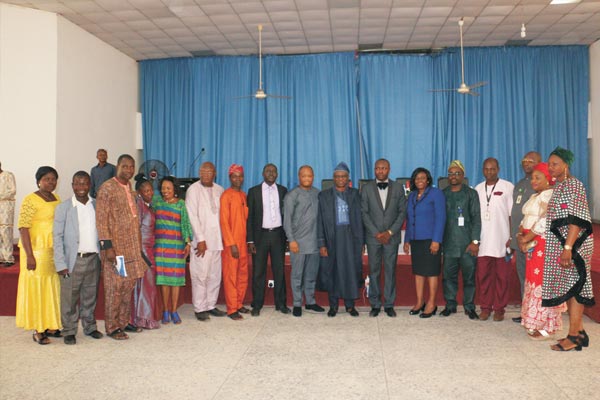 The Non-Academic Staff Union of Education and Allied Institutions (NASU), Olabisi Onabanjo University Chapter, on Thursday, 20th December, 2018 held an end of the year thanksgiving and annual get together for its members. The occasion which was full of thanks and praises to Almighty God for yet another year free of chaos and calamities, was attended by the Vice-Chancellor, Professor Ganiyu Olatunji Olatunde and other Principal Officers of the University and functionaries.
In his opening remarks, the NASU Chairman, Mr. John O. Rasaq, who was full of joy, thanked God for His faithfulness and appreciated members of the Union that worked together with him for their perseverance and doggedness and the show of love.

He stated some of the achievements of the outgoing year to include, prompt and continuous payment of salaries as and when due, the Ghana and Ede workshops, prompt payment of hazard arrears, training workshop/ capacity building for Drivers, Security staff and Gardeners, amongst others.

He enjoined the members of the Union to be prepared for the tasks ahead in the New Year that will enable the University to achieve set goals and targets and advised members to be ready to cooperate with the University Management. He informed that in the outgoing year, the Union lost three of its members and prayed for the reposed of the souls of the departed. He further advised members to desist from every illegal deals with students and staff that could bring disrepute to the Union in particular and the University, in general.
In his good will message, the Registrar, Mr. Femi Ogunwomoju expressed his excitement to be part of the celebration. He thanked God for bringing peace and tranquility to the campus and pleaded for the continued cooperation and trust of the members of the Union in the system while the University Librarian, Dr. Adebambo Oduwole, in his contribution, also sought for the continued support of members of the Union. The Bursar, Mr. Semiu Makinde congratulated members of NASU for yet another joyous occasion and appreciated their efforts at ever being ready to work. The Chairman, Security Committee, Professor Alaba Adenuga expressed his delight with NASU members because they are great people, while the CSO, Mr. Rasheed Adekunle seized the opportunity to appreciate the University management for regularizing the appointment of 32security staff. Mr. S.T. Williams, the Director, Works and Services of the University, in his remarks, expressed happiness about the leadership of the University that created a conducive environment for workers and prayed for long life for members of staff.

The NAAT Chairman, Mr. A. Adebiyi, appreciated the NASU members and thanked them for their cooperation. He enjoined them to choose the right candidates during the upcoming election of the Union in March, 2019. The former NASU Chairman, Mr. Rahman Adewole extoled the virtues of the leadership of the Vice-Chancellor and his efforts so far at ensuring a smooth running of the University. While delivering her own goodwill message, the Deputy Vice-Chancellor (Administration), Professor (Mrs.) Ebun Oduwole remarked that the University staff  have been enjoying the grace of God  and expressed her joy  because NASU members had been of tremendous help in various developmental progress of the University.

The Vice-Chancellor, Professor Ganiyu Olatunji Olatunde was overwhelmed and gave gratitude to God for keeping us alive to witness the thanksgiving and prayed for the repose of the souls of the departed ones. He acceded to the fact that NASU had been of tremendous assistance to the University and urged them to continue to support the University Management in its developmental strides. He assured of continuing prompt payment of salaries and also promised to sustain the capacity building Workshop that he initiated. He seized the opportunity to inform the gathering about the plan to re-brand of the OOU pure water and resuscitate the OOU Bakery. He sought for the support of NASU members at sourcing for philanthropic gestures from prominent personalities in the community and advised members of the Union to continue to show loyalty to the University and strive for its development.

The occasion also witnessed the recognition of the immediate past Registrar, Mrs. Omolara Osunsanya, by the Union, for her laudable achievements during her tenure. In her response, the former Registrar appreciated members of the Union for their unalloyed support during her tenure in office and prayed for long life and prosperity for the members and the entire University community.