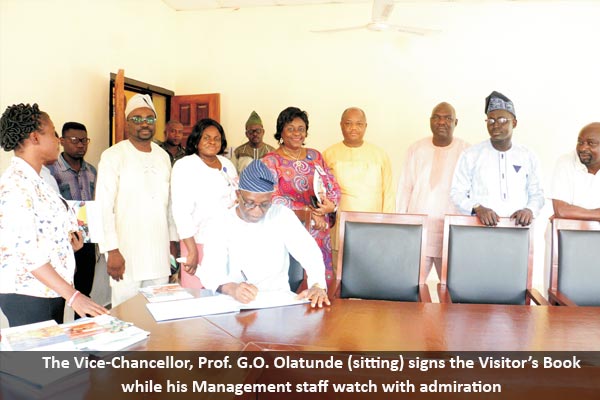 Reaffirming its determination and desire to get well acquainted with its affiliates, the Management of Olabisi Onabanjo University, Ago-Iwoye on Friday, 29th March, 2019, undertook an exploratory visit to one of its affiliates, Talabi Diabetes Centre located at Isara, Remo North Local Government Area of Ogun State. The visit which was led by the Vice-Chancellor of the Institution, Prof. Ganiyu Olatunji Olatunde had in the team other members of the University Management and some University functionaries.

Receiving the team at the Centre, the Coordinator-in-charge, Dr. Olubiyi Adesina, a Fellow of the Medical College of Physicians of Nigeria in Endocrinology and Metabolism, who was represented by Mrs. Adediji Fumilayo welcomed the Vice-Chancellor and his team to the Centre and congratulated Prof. Ganiyu Olatunji Olatunde on behalf of the Centre on his appointment as the Vice-Chancellor of the University. He gave an insight into the establishment and progress of the Centre. According to him, the Centre, which was created as a non-profit organization established by the Olumuyiwa Talabi family with the overall goal of overcoming diabetes through the development of a sustainable, cost-effective and user-friendly intervention management strategy, had its building complex commissioned on March 11, 2010 with the design, construction, supervision, and landscaping of the Complex undertaken by the Olabisi Onabanjo University. He added that the University also availed the Centre with start-off staff, equipment, furniture and a borehole.

Speaking further on the activities of the Centre, the Coordinator disclosed that it has grown in leaps and bound in its quest to achieving its vision. Apart from the consultation services offered since inception to about 1,618 patients with Diabetes mellitus and hypertension, the Centre also offered other services including laboratory, counseling, continuous in-house staff training, periodic health talks to patients and members of their families among others. It is also interesting to note that treatments involving testing and medication were also offered free of charge from inception till March 2011 when a token fee collection for the various services was introduced, even though drugs to patients are currently being dispensed at subsidized rate, he added.

In his response after the facility tour of the Centre, the Vice-Chancellor on behalf of the management team thanked the Co-ordinator and his team for the warm reception accorded them and disclosed that the visit was not only for the Management to familiarize themselves with the happenings in the Centre but to reaffirm the commitment of the University authorities towards actualizing the vision of the donor. He, thereafter, expressed satisfaction on the activities of the Centre, which according to him was partly attributable to the dedication of staff members at the Centre, especially, in terms of good conduct at work, assets maintenance, and commitment to excellence. The Vice-Chancellor promised that future engagement between the University and the Centre would be further explored to maximize the good work of the Centre.

It would be recalled that Talabi Diabetes Centre is one of the affiliates of Olabisi Onabanjo University located at the outskirt of the ancient town of Isara, in Remo North Local Government Area of Ogun State. It was a product of the collaborative efforts of the Donor, Mr. Olumuyiwa Talabi and Olabisi Onabanjo University, Ago-Iwoye. It was established to enhance the profile of the University on the one hand, and meet the needs of the larger society on the other, through research and healthcare services. Hence, its link with the Obafemi Awolowo College of Health Sciences, Sagamu and the Olabisi Onabanjo University Teaching Hospital for consultations and professional advice in order to have a smooth running of the Centre in the provision of clinical services for patients with diabetes mellitus and hypertension.

It is worthy of note that its Board of Trustees has as its Chairman, a world renowned Professor of Diabetes and Endocrinology, in the person of Prof. Thomas Johnson, who had brought to bear his long standing local and international experiences in Diabetes and Primary health care on the Centre. Health organizations such as Diabetes Association of Nigeria, and World Diabetes Foundation have always given commendation to the Centre for its contributions to healthcare.