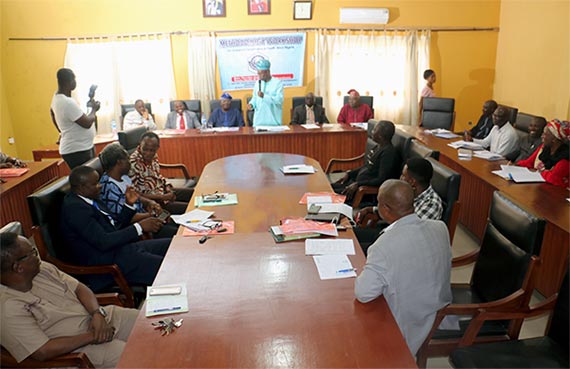 A renowned scholar, Professor Akin Mabogunje, has declared that the 774 Local Government Councils, as structured in Nigeria, would remain ineffectual. The distinguished academic made this known during a recent “Methodology Workshop on Grassroots Governance in Southwest Nigeria 1999 – 2018” organized by the Oba Sikiru Kayode Adetona Professorial Chair in Governance at the Faculty of the Social Sciences Boardroom, Olabisi Onabanjo University, Ago-Iwoye.

According to the revered Professor, the “military created an amorphous structure to which nobody owes allegiance and called it a local government”.  He stated that the present local government councils were “structured on demographic nature”.  Professor Mabogunje lamented that despite this aberration, he was yet to receive a real academic challenge to the ineffectual structure called local government.  He agonized that the military removed the governance of the people by severing social capital.  Mabogunje warned those in power not to play with governance of urban structure.  In his view, those living within a local government were expected to know themselves, their roots, and history.  He, however, observed that all these were no longer in existence in the local government as presently structured.

While welcoming participants to the Workshop, the Vice-Chancellor, Professor Ganiyu Olatunji Olatunde urged local authorities to, as a matter of necessity, play prominent role in the governance services to their people.  Professor Olatunde noted that this was the practice in advanced democracies with municipalities, boroughs, local administration and other small units of government.  The Vice-Chancellor argued that if cities like London, Tokyo and New York could conduct not just national but international transactions on behalf of citizens who reside there, nothing should stop our local authorities, whether formal or informal, from playing similar roles for their people.

Making his own remarks, the occupier of the Oba Sikiru Kayode Adetona Professorial Chair on Governance and the convener of the Workshop, Professor Ayo Olukotun frankly noted that our local communities were characterized with poverty, unemployment, ecological degradation, rising crime rate, and educational decay.  He lamented that these crises have been compounded by the ineffectuality and hollowness of local governments which have turned themselves into money sharing institutions with little or no impact on everyday lives of the people.  However, Ayo Olukotun was quick to observe that rescuing the inefficient and almost absent state institutions at the local level was the dynamic agency of community power, which relied mainly on local attachment, integrity and volunteering action as exemplified by the Ijebu Development Initiative on Poverty Reduction championed by the Awujale of Ijebu-land, Oba Sikiru Kayode Adetona and Professor Akin Mabogunje which was known to be outstandingly successful.

Professor Olukotun therefore queried the reasons behind the failure of government institutions compared to the success stories of the civic energy of communities and their leaders that had produced miracles of productivity and poverty alleviation in the same environment.

Other invited resource persons that gave insightful presentations at the Workshop were Professor Tunji Olaopa, the Executive Vice-Chairman, Ibadan School of Government and Public Policy, Dr. (Mrs.) Sharon Omotoso of the Institute of African Studies, University of Ibadan, and Marcus Adenuga of the Ijebu Development Institute on Poverty