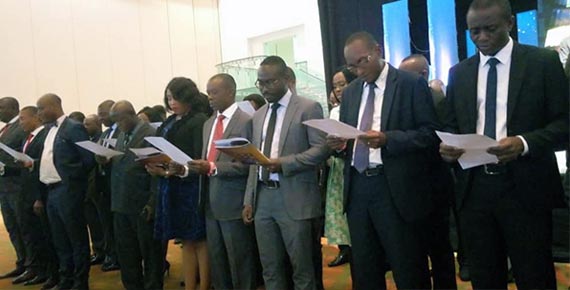 The current Head, Department of Banking and Finance of Olabisi Onabanjo University, Dr. Bamidele Iloh was officially inducted as a member of the prestigious Chartered Institute of Stockbrokers of Nigeria at the Institute’s 22nd Annual Conference held between 4th and 5th October, 2018, at the Eko Hotel and Suites, Victoria Island, Lagos with the theme: “Nigerian Economy and the Capital Market: Exploring the next frontier for growth

At the colourful ceremony, the Vice President of the country, Professor Yemi Osibajo who was represented by Mrs. Tejude delivered a speech titled “Recovery Growth Plan (ERGP) on the Nigerian Economy”. While speaking on the event, Dr. Bamidele Iloh said he had been qualified for the award since 2002 just before he joined the services of the University but, had to delay the processes in order to concentrate on the immediate challenges of his new career in the academics. He narrated that he was able to complete his PhD later and on this, he received a special congratulatory message from the Institute through a phone call from the Registrar, Mr. Adedeji Ajadi ACS, ACIA, who together with other colleagues in the Institute encouraged him to pursue the induction which eventually came to reality this time.

Speaking further, Dr. Iloh further informed that he had been using his relationship with the CIS to foster a strong linkage between the Institute and the Department of Banking and Finance of OOU thus necessitating the Institute’s decision to constantly send its representatives to give career talks at the Banking and Finance Students’ Association week in the last four years. This has stimulated the interest of some of the past and present students in the elite profession of Stockbroking and Investment. He posited that the collaboration has also encouraged the students to commence CIS professional Diploma Examination in Stockbroking and Investment while still in school, with other students also on the verge of writing professional examinations to become Chartered Stockbrokers.

Dr. Bamidele Iloh who is also an associate member of the Institute of Chartered Accountants of Nigeria, ICAN, said his membership of the two Institutes has enhanced his teaching and research activities which has invariably afforded him the opportunity of contributing to the much-advocated, town and gown, relationship for national development.