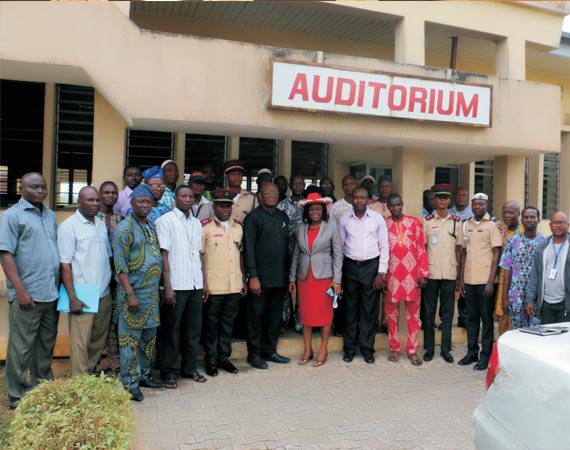 A team of officers from the Federal Road Safety Corps (FRSC) led by Mr. Adebola Olotu, the Deputy Route Commander, Ago-Iwoye, was at the Olabisi Onabanjo University on an enlightenment programme for University Drivers on Tuesday 10th December, 2018 at the Moot Court Auditorium, Main Campus, Ago-Iwoye.

The Vice-Chancellor, Professor Ganiyu Olatunji Olatunde, who was ably represented at the interactive session by the Deputy Vice-Chancellor (Administration), Professor (Mrs.) Ebun Oduwole, commended the efforts of the FRSC for organizing the interactive session for the University Drivers. She informed the gathering that the enlightenment programme was packaged for the drivers to enhance their skills and knowledge on the need for safe driving and regular maintenance of the vehicles in their care.

In his address, the Director of Work and Services, Mr. S.T. Williams implored the drivers to commit their minds to the training and counseling by the officers of the FRSC. He submitted that the 30 participants that were drawn from across the four campuses of the University, were the first set to undergo this enlightenment programme, with plans already in place to subsequently involve other drivers in the University.

Speaking at the programme, the Chairman of the Non-Academic Staff Union (NASU), Mr. O. J. Rasaq, who was present at the event, appreciated the University Management for keeping to its promise of ensuring the with the aim of improving their knowledge and increase their output on the job. He opined that such gesture will motivate members of staff and bring about development in the University. He thereafter enjoined the drivers present at the event to seize the opportunity of the training workshop, as a way of improving on their job.

In his address, the Deputy Route Commander and Staff Officer, Operation, FRSC, Ago-Iwoye, Mr. Adebola Olotu, thanked the University Management for the opportunity given to the FRSC Officers to hold the interactive session with the University Drivers. He informed the Deputy Vice-Chancellor (Administration), Professor (Mrs.) Ebun Oduwole that the St. Mary’s Eye Clinic, Ago Iwoye crew also agreed to conduct a free eye test for the drivers during the training session. He thereafter spoke on the theme “Defensive Driving Techniques and Vehicle Maintenance inputs” where he explained that the driving environment was becoming more dangerous as a result of many contributing factors ranging from, abundance of vehicles on our roads, increase in unenlightened and untrained drivers and poor roads infrastructure. He stressed that in such frustrating environment, the only group of drivers that could survive are those called “Defensive Drivers.”  He disclosed that defensive driving emphasizes the awareness of persistent dangers in the traffic environment and the determination of the individual road users to remain safe, inspite of adverse road conditions and the dangerous traffic habits of other road users. He counseled the drivers to PROTECT themselves against all kinds of accident-causing situation and also REACT in the correct manner, when faced with unexpected emergencies, while recognizing the hazards and understanding of defensive driving to prevent accidents. He explained further that a defensive driver must be skillful, knowledgeable, alert, and foresighted, with a good knowledge of his journey, to have a perfect trip.

Mr. Adebola Olotu further enlightened the drivers on the need for vehicle maintenance and other diagnostic checks, which should be carried out in order to keep the vehicle in good working condition, prevent the vehicle from breakdown as well as restore and correct the faults that may develop from time to time. He advised  that preventive maintenance which involves daily, monthly and six-monthly checks of the state of the vehicle to ensure functional battery, adequate water, radiator coolant, brake fluid and Engine oil levels, fan belt slackness, inspection of each tyre for abnormal wear, greasing of doors, adjusting head lamps where necessary and carrying out full servicing every 5,000km as well as, annual maintenance checks and inspection of vehicles before long trip, are all to be inculcated into the skills of good driving to reduce crash/accident  on our roads.

At the end of the interactive session, a free eye test was conducted for the drivers by a team of Ophthalmologists from St. Mary’s Eye Clinic, Ago-Iwoye, Ogun State.