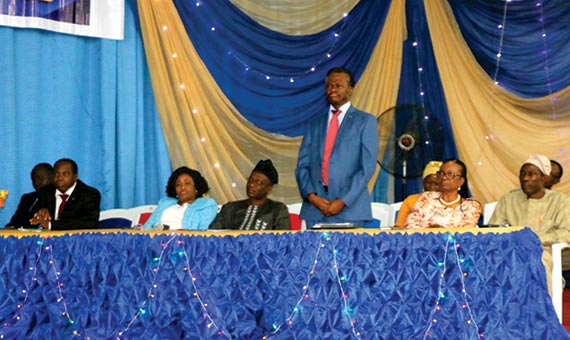 The maiden edition of the Faculty of Social Sciences Open Guest Lecture took place on Wednesday, 27th June, 2018. The Lecture attracted members of the academia from Universities in Nigeria, traditional rulers and several other invited guests to the Otunba Gbenga Daniel Lecture Theatre where the Lecture was held.

In his welcome address, the Dean of the Faculty, Professor Israel Ademiluyi posited that the inauguration of the Open Lecture was “to avail the Faculty the experience of the giants in the Nigerian society in areas relevant and important to the mandate of the Faculty”.  He posited that “there was a link in both the theory and practice of public governance and sustainable development which was the topic of the Lecture”.  He argued that sustainable development was synonymous with good governance hence the two could not be separated.  He stressed that there was imperative to begin to discuss and examine the intellectual context of the topic’s origin and its implications for the contemporary society.

In his opening address, the Vice-Chancellor, Professor Ganiyu Olatunji Olatunde, noted that the Open Lecture was aimed at boosting the town-and-gown relationship of the University.  According to him, “it is axiomatic that Universities have special relationship with the society, culture and tradition.  This kind of relationship plays a strong role in promoting, preserving and transmitting values to both the University and the society”.

He remarked that Public Governance desired to bring change in the nation’s attitude to governance, adding that good governance was essential for lasting and massive development of the country.  He, however, concluded that as the institutional framework of the United Nations, Sustainable Development agenda should be the priority of every government, hence the topic was apt and suitable for discussion.

The invited Guest Lecturer, Engineer (Dr.) Harold Olusegun Demuren, who spoke on the topic “Public Governance and Sustainable Development”, stressed that good corporate governance was an opposite of bad governance.  He said that public governance and practice by successive governments in the country ought to make meaningful impact on the development of the country.  He stressed that bad government in the country since independence and even today was, however, a phase that would pass away if the government was truly committed to sustainable development.  He outlined the indices of bad governance to include, but not limited to, erratic power supply, degenerated educational system, and massive unemployment.

He disclosed that over fifty percent of the poorest people in the world were Africans adding that Nigeria had become the poverty capital of the world today because of failure in governance.  He disclosed that the country had crumbled in the face of developmental indices due to persistent military rule and corrupt leaders.

He posited that good corporate governance must cherish accountability, transparency, and integrity in governance, noting that good governance was a product of job creation, effective youth participation in governance, and advancement of women and female folks’ ideals while bad governance promoted poverty, disease, unemployment and discrimination against women.

He submitted that the country needed to improve on its political systems and work on tribalism, greed, ethnicity, religious bigotry and conflicts, adding that discipline and accountability must be the country’s focus in governance with the establishment of holistic social lives, avoidance of failed states phenomenon, plan for the poor and the vulnerable, strengthening of the national defense, working out and maintaining wise foreign policies and politically provide a level playing ground for political aspirants.

He stated that this positive approach by the people must be imbibed by our youth to make the country a good place to live in.

Highlights of the lecture included a question and answer session and presentation of gifts to the Guest Lecturer, Eng (Dr.) Harold Olusegun Demuren and his wife, Mrs. Osaretin Demuren.