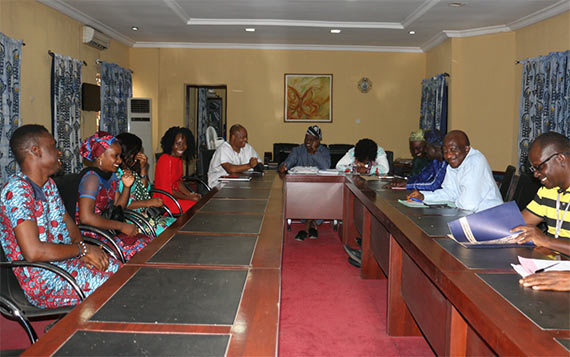 A sendforth ceremony was organized by the University Management on Friday, 2nd November, 2018, for the outgoing 2017 Batch B, Stream 1 corps members who served at various units of the Olabisi Onabanjo University, Ago-Iwoye, for the past one year.

Speaking at the ceremony, the Vice-Chancellor, Olabisi Onabanjo University, Professor Ganiyu Olatunji Olatunde welcomed the corps members and subsequently introduced the Principal Officers of the University and the Dean, Student Affairs, Dr. O. Sefiu Oladunjoye. He advised the corps members to continue to strive for excellence and develop passion for hardwork, exemplify sense of creativity and productivity in their daily endeavours. He further admonished them to exhibit good character, and fear of God which obviously will make them to stand out among their peers. He added that, serving the University in the last one year with utmost commitment has inspired the University Management to organize this sendforth ceremony to appreciate their good work.

In her own remark, the Deputy Vice-Chancellor (Administration), Professor (Mrs) Ebun Oduwole implored the corps members that they had what it takes to make it to the top because they have the brain as well as the composure to excel in the Nigerian environment of today especially, that almost all the outgoing corps members made good grades in their degrees which confirmed their level of diligence, brilliance and intelligence.

Speaking during the ceremony, the Dean, Student Affairs, Dr. Sefiu Oladunjoye advised the corps members that, as young people, they needed to stand for something, else, they would fall for many things and, that they should strive to make impact in their fields of endeavor in order to give back to their generation. He further charged the corps members to improve themselves in diverse areas by making sure that they know little about something and always follow the trend of technology as the world today, is a global village. He also encouraged them not to rest on their oars but continue to aspire for the top in order to be relevant at important places in life.

Thereafter, the Dean, Student Affairs, Dr. Sefiu Oladunjoye, presented to the corps members, souvenirs on behalf of the University Management.