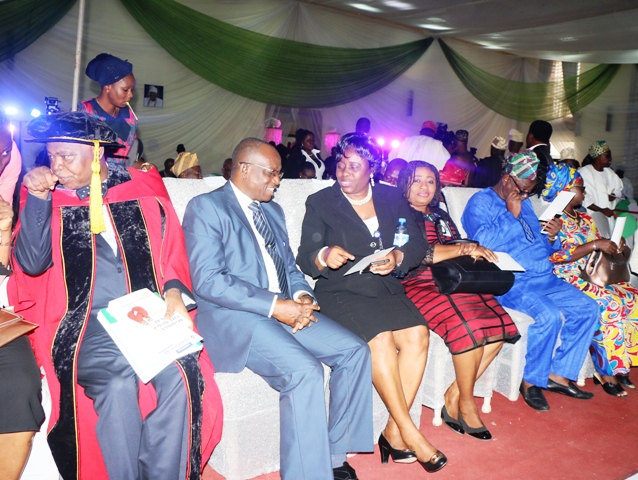 The second Annual Public Lecture of the Oba Sikiru Kayode Adetona, Professorial Chair in Governance took place on Thursday, 10th May, 2018 at the Multi Purpose Hall of Adeola Odutola, Ijebu-Ode.

The event attracted dignitaries from far and wide in the country and royal fathers from all the regions in Ijebu-land and beyond.

In his welcome address, the Chairman Board of Trustees of the Chair, Mr Olatunji Ayanlaja, SAN stressed the importance of the lecture which according to him was to proffer solutions to the negative contemporary challenges affecting governance in Nigeria.

He said that the timing of the lecture was apt,when looking at the cross road the country had found itself politically, economically and security wise. He emphasized that the collaboration between the university and the trustees of the Professorial Chair was in perpetuity in other to preserve the legacies of Oba (Dr) Sikiru Kayode Adetona, the donour of the chair.

Delivering his opening remarks, the Vice-Chancellor, Olabisi Onabanjo University, Professor Ganiyu Olatunji Olatunde stated that non-governmental sector in the nation’s space was a link between the Family and the State and no doubt has continuously played land mark role in Nigeria political history. He stressed that the partnership between the university and the board has shown that a time would come when scholars would engage in research into the legacies of the donor’s contributions to the development of the country’s social political challenges and conflict resolution. The Vice-Chancellor stated that the trustees’ decision to achieve his dream led to the turning of the sod of a research centre in the university which would encourage interactive scholarly studies and research activities to enthrone good governance in the country which would be a good omen to the stakeholders.

The Chairman of the occasion, Professor Anthony Asiwaju, in his own speech revealed that the donor, Oba (Dr.) Sikiru Kayode Adetona has impacted positively to the progress of Nigeria being a defender of truth and voice of the voiceless. He stressed that the traditional ruler has initiated the culture of moral authority and legitimacy as one of the legacies that he desired to leave for posterity.

The occupier of the Professorial Chair in Governance, Prof. Ayodele Olukotun in his lecture entitled “Civil Society and Governance in Nigeria evolving Democracy, 1999-2018” examined the rubrics          of Governance in the context of Civil Society and its role and impact in Nigeria’s emerging democracy. He posited that Civil Societies are crucial to the establishment of good governance, adding that their activities and activism were aim at defending democracy, creating pro-people regimes that major on accountability, rule of law; human rights and other indices of good governance. He stressed that the country and societies were considered magnificent by many observers in their heroic exertions in reining military autocracy in 1980s and 1990s.

He posited that Civil Societies in Nigeria need to “counterveil state impunity and restrain predatory behaviours on the part of State Officials”. He further said, “that it was important to note that Civil Societies in Nigeria were often characterised by ethnic and religious conflicts, partisanship, corruption, cooptation by state actors and their locational concentration in the South-West only”. He stressed that additionally “Civil Societies are caught in several contradictions which include poor governance structures, the presence of phantom boards, careerism as well as unethical conducts”. He called on the civil societies to chart a roadmap for reform and reinvention to be able to play their crucial roles in governance.

In his response, the Donor, Oba (Dr) Sikiru Kayode Adetona stressed the primary responsibility of the State was to take care of its citizen and provide security of lives and properties without which no meaningful development could be attained. He opined that the  government must listen to its people and hoped that the enriching         lecture and many more to come would change government at all levels to perform their statutory roles in democracy.

The Governor of the State, Senator Ibikunle Amosun who was represented by his Deputy, Mrs. Yetunde Onanuga, affirmed that Civil Societies play leading roles in the enthronement of good governance in the country. She stressed that Senator Ibikunle Amosun always put the issue of education for all, particularly, in Tertiary Institutions at the front burner of its developmental agenda which she said  the Governor  was bound to fulfill before leaving office.

The event which coincided with the donor’s birthday was marked with pomp and pagentry and with a call for financial inclusion of participants in the noble project.